I've had a few ideas about unconventional types of clocks that could be built that don't work with the two well-known principles of a digital number display or an analogue display of rotating hands. I believe that with enough practice/training one could learn to read very different kinds of clocks by just looking at them shortly.

One of these ideas involves liquids. It's a quite unnecessarily complex way to display the time but it would probably be relatively easy to learn to read this one. I highly doubt that I will ever build a clock like this. So I'm writing down my idea in the hopes that I'll then be able to stop thinking about it every other day.

Without trying to be compact, the clock would be made of several pumps and transparent tubes mounted on a board. The main part of the display (the part you'd use to tell the time) would be three vertically oriented tubes mounted next to each other, each with an open top (or an air valve to keep dirt out). Below them there would be a small tank that contains a colored fluid. This fluid would be transported by a pump to one of the tubes at the top. One tube would display hours, one minutes and one would be used for seconds. At the full minute, the third tube would be emptied by the pump. Then a equal amount of the colored liquid would be pumped up the tube until the next minute is up and it's emptied again. The same principle would apply for the second tube: It slowly rises at a constand speed and is emptied at the full hour. You can image how the first tube would be filled. It would either be emptied every 12 or every 24 hours, which I would prefer.

On the board one could mark certain points of the tubes (like every hour the the first one, every minute for the second one, ...) to make it easier to tell the exact time.

There could be one pump and some valves to control with tube will get how much fluid. Or there could be three independent pumps, one for each tube.

That's actually a much simplified version of my initial idea. You could (at least in theory) build a closed loop that contains as little air as possible and does not have the risk of ingesting dirt over the time. In the reservoir/equalising tank there could be two separate fluids, e.g. red water and blue or transparent oil. Those two fluids would stay separated in the equalising tank and either of the fluids could be fetched at will by pumping from a low or high place of the tank. This way much more elaborate patterns could be created in theory. But if the board had a color with hight enough contrast to the fluids colour, that should be enough to be able to tell the time and it would be less error-prone to do it the simple way.

There are more than two ways to display the time. There are a few project ideas in my head to create clocks that don't use digits or hands but tell you the time in non-conventional ways. At some point I wanted to make a clock that uses a method that I've never seen or heard of before. I came up with one that uses colour scales for hours, minutes and seconds. This is the one i have actually built.

I chose a picture from My Little Pony: Friendship is Magic that's related to time. Fans of the show know why I called it Tardie. Three parts of the picture are laser etched in three sheets of acrylic. Each sheet has RGB LEDs on its side so each sheet can be individually lit in a different colour. An Arduino Pro Mini and a realtime clock module control the colours of the three LED strips. 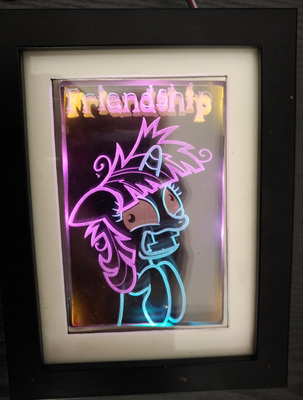 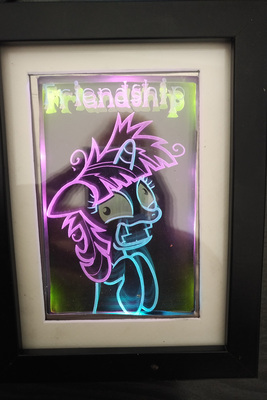 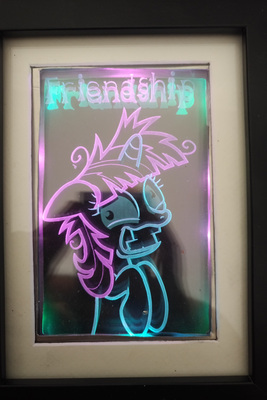 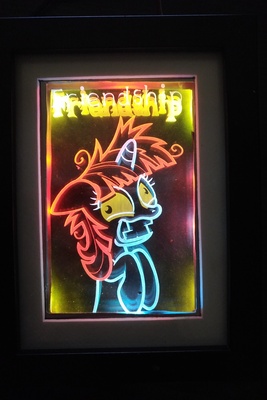 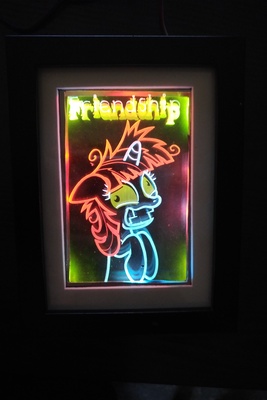 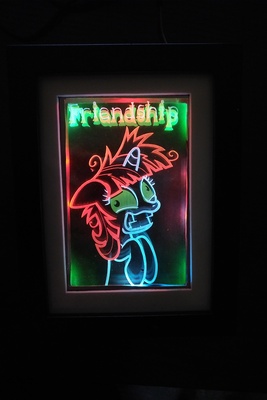 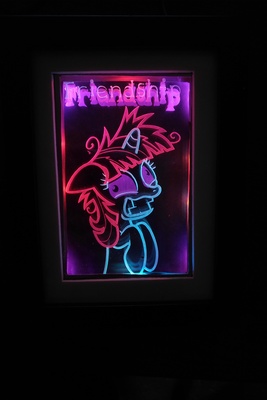 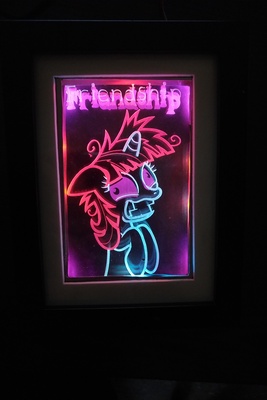 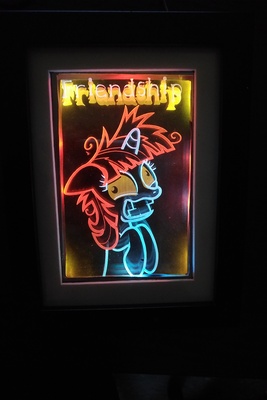 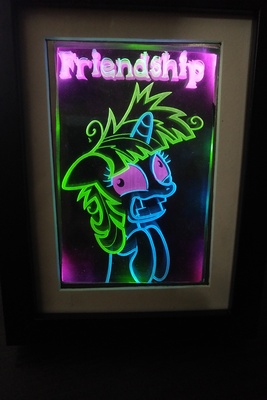 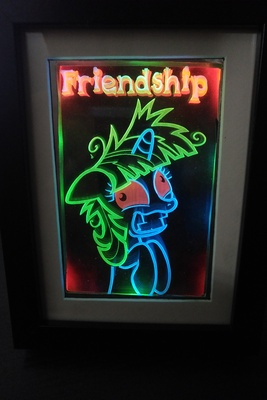 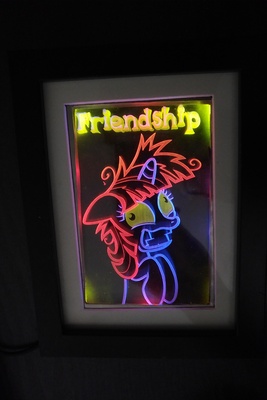 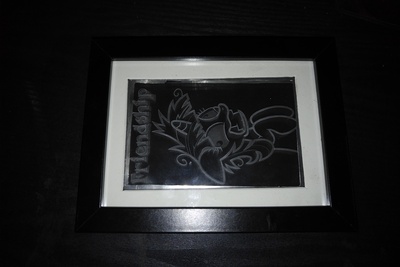 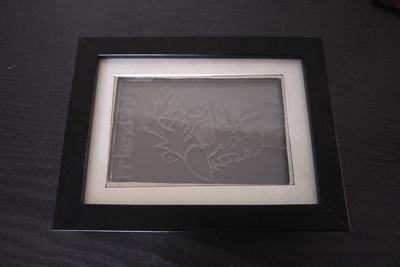 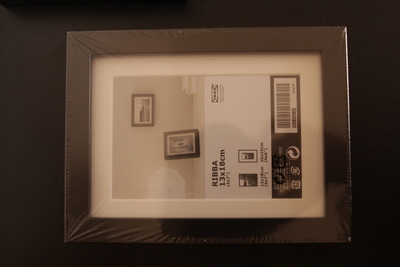 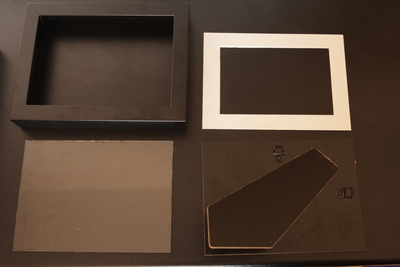 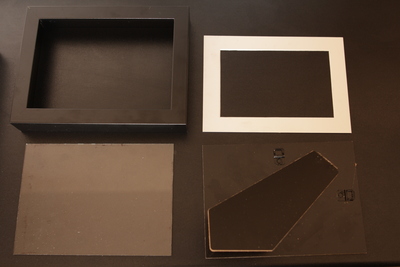 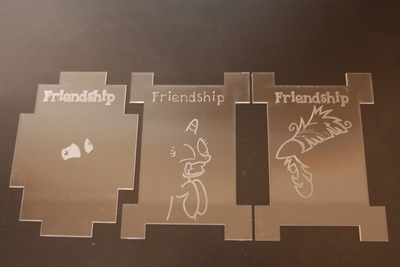 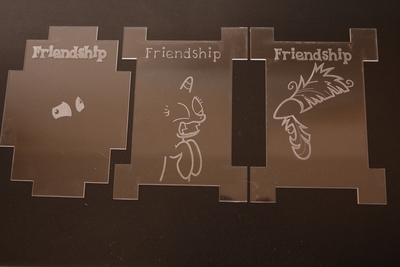 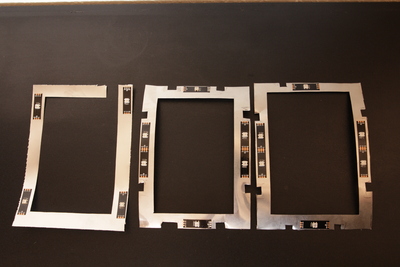 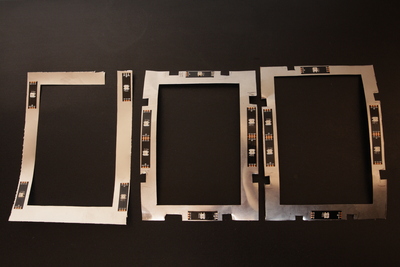 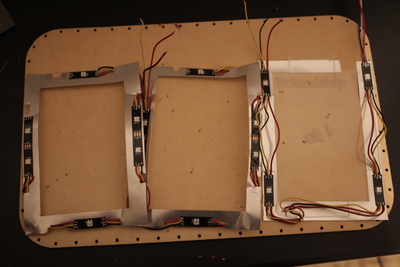 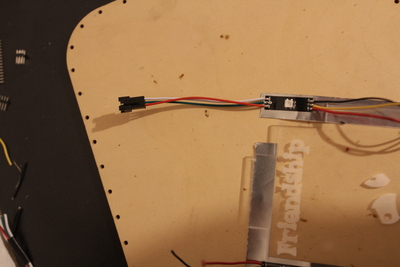 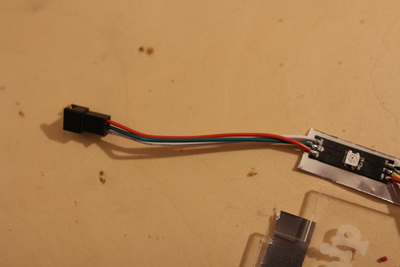 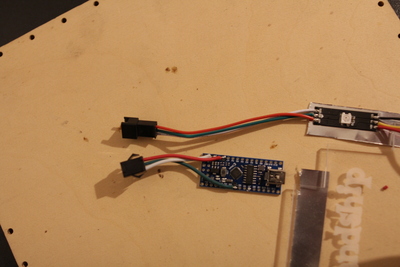