Fred (The Case Lid And Cooling)

In this entry I'll describe how Fred's components are air cooled.

So, after removing the fan wall and unplugging the two fans in the back of the case there was no active cooling left. That's good for reducing noise, but not enough cooling for the hard drives, the CPU and the SAS controller cards. Since the case is not mounted in a rack and nothing is placed on top of it, I decided to use the space in the case lid to place larger fans.

My idea was to replace the CPU cooler with a larger one that just fits into the case and have a fan above it suck out its hot air (also pulling in ait from the RAM modules next to the CPU socket). I fount a heat sink from Scythe called Iori (SCIOR-1000). Mounted on the socket there would be just enough space for a 15 mm fan above it. As it turns out though, the heat sink is large enough to cool the CPU passively and the RAM doesn't need any additional cooling, too. So the fan above it is not even plugged in.

Since the HBA and the RAID card that I'm using are designed for servers with a proper airflow, they need at least some additional cooling. Their heat sinks are quite small for the amount of heat they produce. But there was enough room above them to place a fan that sucks the hot ait directly from the extension card area out of the case. I was told these cards usually don't have any problems getting extremely hot. But I rather don't want to have them do their things for hours or days streight without any active cooling. Replacing their heat sinks with larger ones would only be a sufficiant option if there was room for much much larger heat sinks.

I don't want to have have hard drives run continuesly without any active cooling, especially when they are sitting in enclosures that don't allow for any aitflow without some amount of pressure. There is just no-where for the heat to go on its own in these tight drawers. I decided for three 140 mm fans that would neatly in a row behind the hard drive compartment and backplane. Since the motherboard isn't that large, there was nothing but a few cables in that area of the case. I've mounted an aluminium bar that I had lying around and tucked two pieces of flat plastic between this bar and the bar that originally held the fan wall at the bottom. That way, the air that is pressed in from above gets directed only into the hard drive compartment where it has no way to escape without passing the hard drives.

Unfortunately the room around the hard drives is so small that quite a lot of air preassure is needed to cool them as much as I wanted to. Running the fans at full speed all the time is hardly enough to keep them at a temperature that I deem acceptable. I tried to increase the cooling effect by sealing all the edges and other tiny spaces where some air could escape without cooling the hard drives. But this didn't lead to a measurable difference. I ended up taking out two of the 16 hard drives to increase the size of the duct. I chose two drives in the centre so that there now is a large surface where the air cools the remaining drives. That lowered the temperatures of the surrounding drives a lot. The temperature of the drives at the edges was of course hardly effected. But those weren't the problem anyway.

I'll probably continue about the rest of the case mod in a followup entry.

After getting rid of the fan wall, the power supply was the main source of noise. The original PSU was a 3U redundant (2+1) server power supply. Noise does not matter with machines like that. I wanted to be able to have it running in my living room though, so the noise had to drop a fucking lot. Seriously, that's said so many times for people who don't work with servers like this. But people are still surprised when they hear a server fan for the first time. One of original 60 mm fans in the back is louder than my vaccum cleaner. And there were two of those, four 80 mm fans and five 40 mm fans. Three of the latter in the power supplies. Because I have no means to control the fans in software and don't need all the power the power supply can supply, I tried how much I can lower the noise by adding resistors in series to the fans. That did reduce noise a lot. But not only aren't these fans optimated for quiet operation, they are 40 mm fans. They will nver be quiet enough.

So I looked online for a power supply that (1) fits in the case (it's not completely ATX), (2) can supply enough curret for everything and (3) is trustworthy/doesn't appear to be too cheap. I found a Newton Power Model NPS-300AB B, which doesn't meat points 2 and 3 but fits perfectly into the case that it was a weird feeling to accept that it is mostly coincidence. I only had to drill the screw holes and that was it. It's hardly wnough for 14 HDDs and the internet sais it's really cheap and not trustworthy. But I went with it anyway in order to pay tribute to r/thingsfittinginthings.

Not a year later the PSU died and was replaced by a better SFX unit.

About the rest of the mod in separate entries.

Fred (Modding The Quiet Into A Server Rack Case)

Fred was my attempt at building a NAS that replaces all the smaller NASs that I already had. But I like to collect stuff and it's never going to be enough. So it ended up being just another extension of my home network.

It's an old 3U Supermicro server case with 16 3.5" hard drive drawers, a good but not too bulky Asus motherboard and a nice low-power Intel CPU. I kept the motherboard, CPU and 32 GB ECC RAM. It's more than enough.

In short, what I did was: Switch the PSU to a quieter one, build fans into the lid for quieter drive and card cooling, painted the case, switched the CPU cooler for passive cooling even at constant 100%, added two HBA cards and 14 8 TB hard drives (two drawers left intentionally free).

I will tell the rest another time in another entry/separate entries. 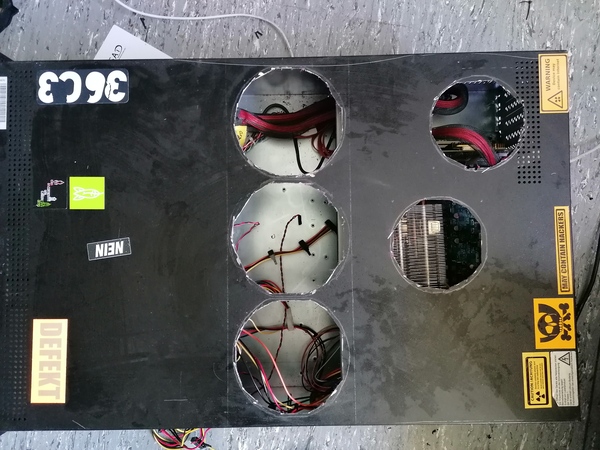 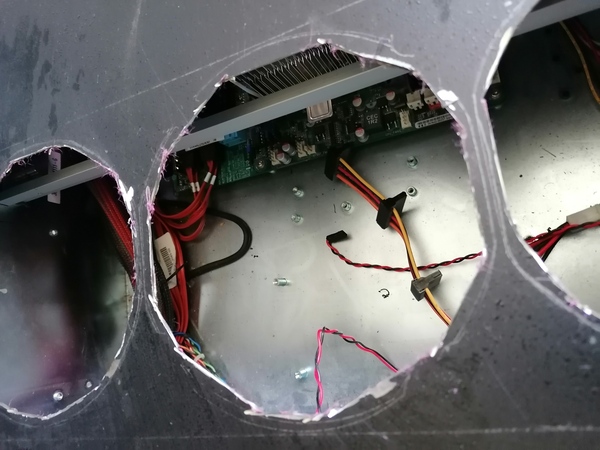 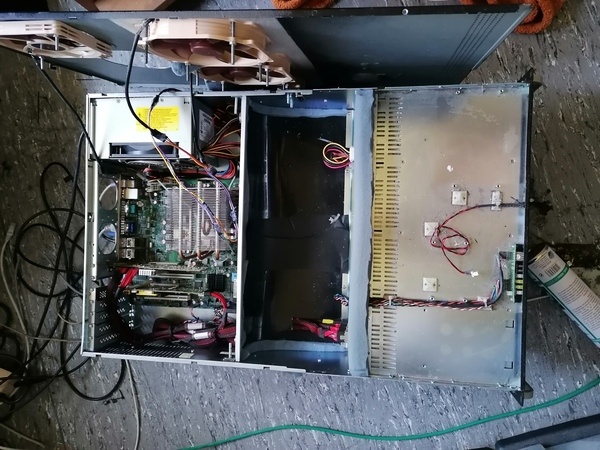 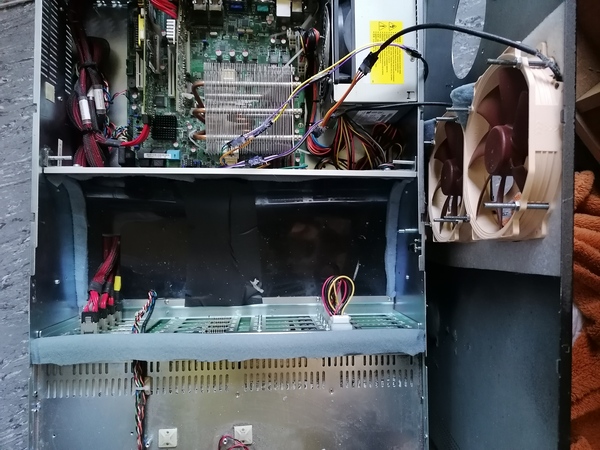 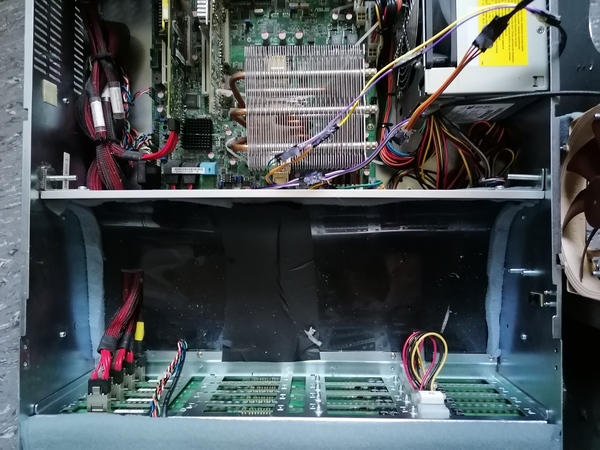 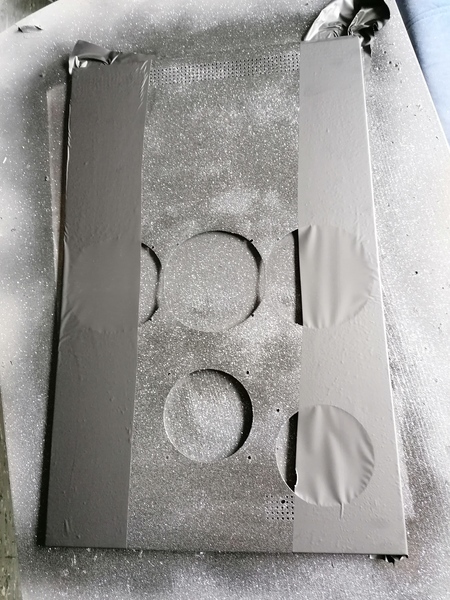 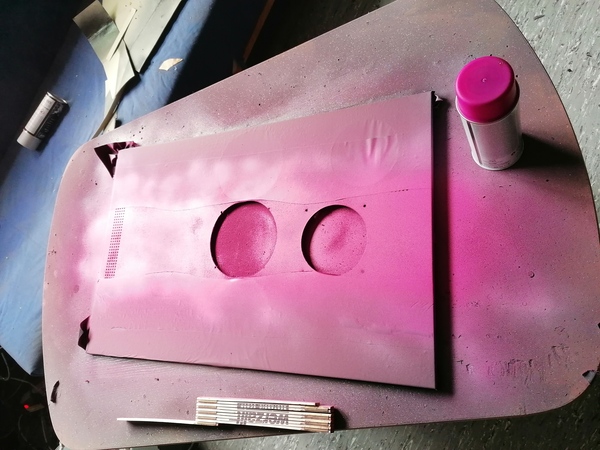 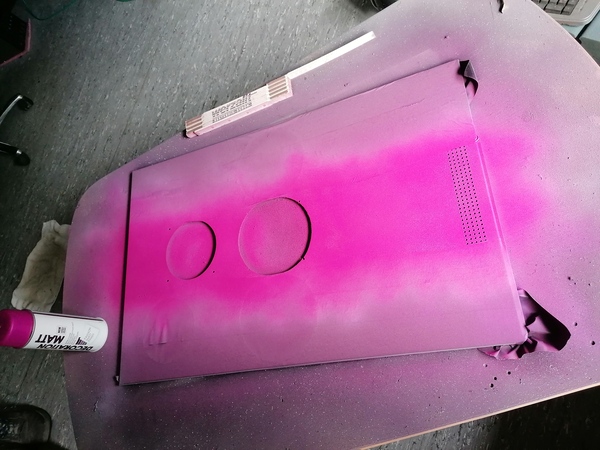 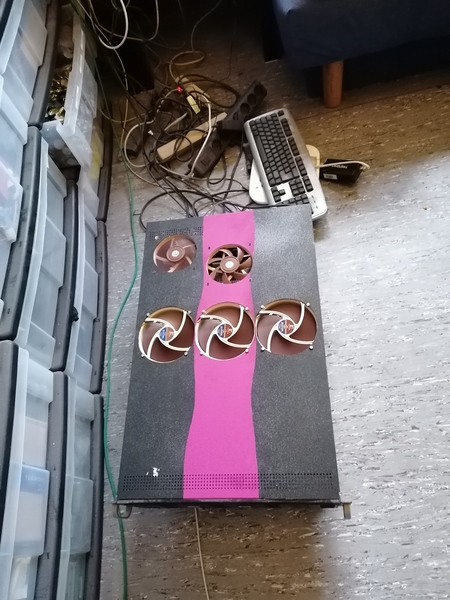 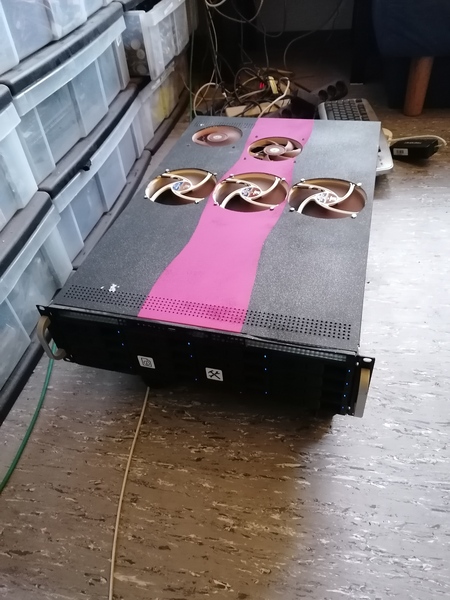 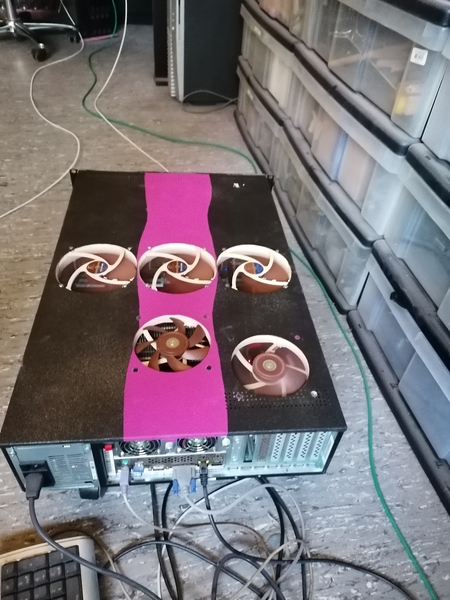 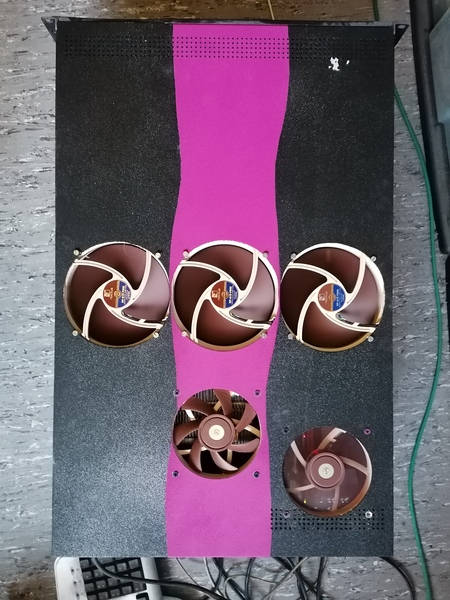 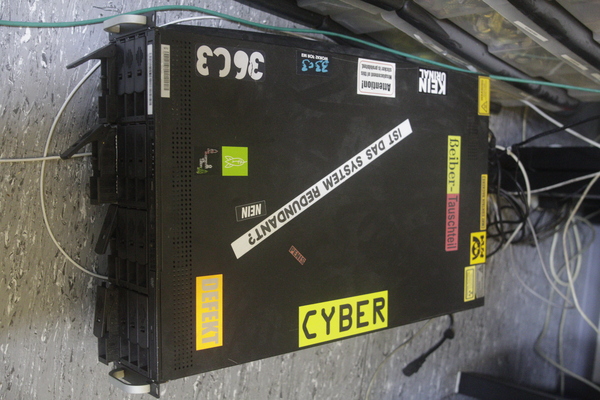 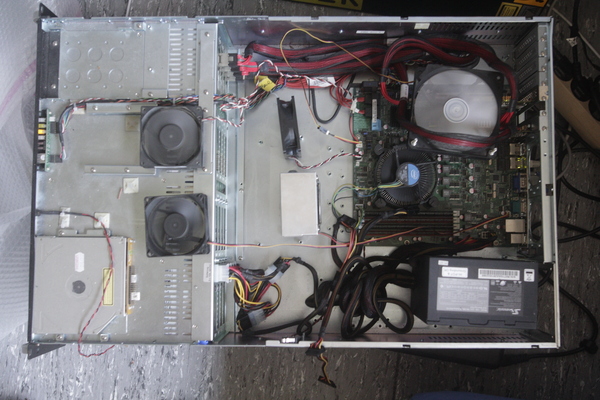 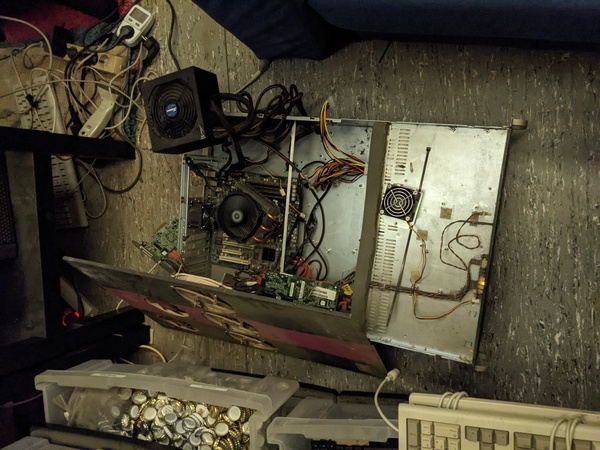 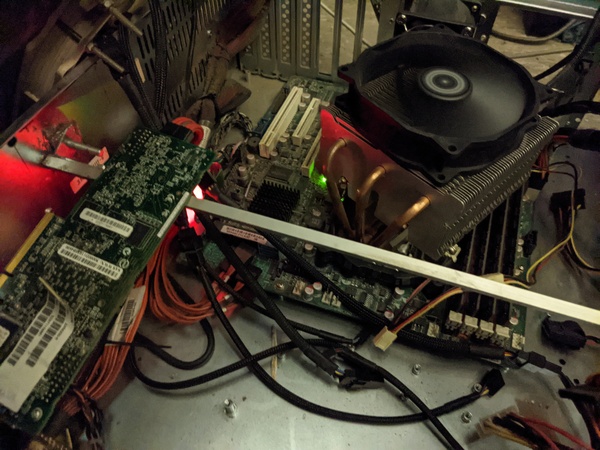 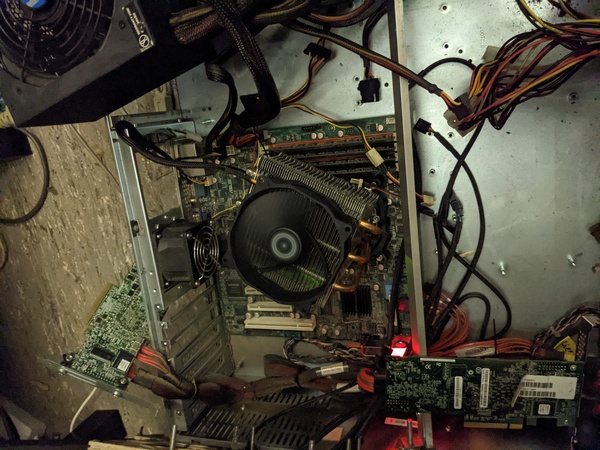 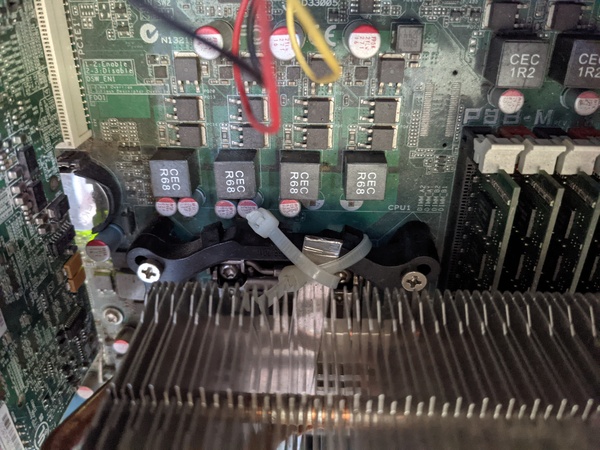 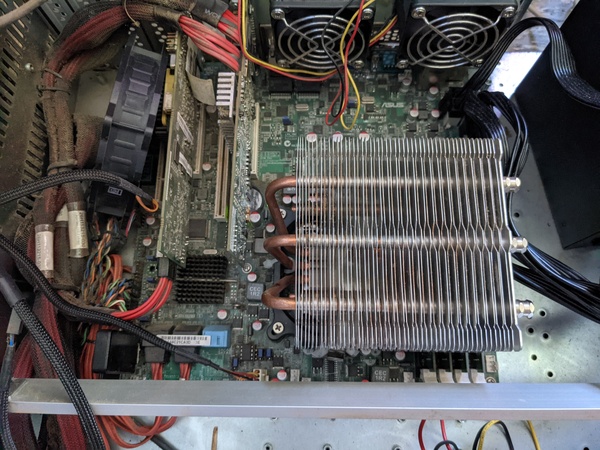 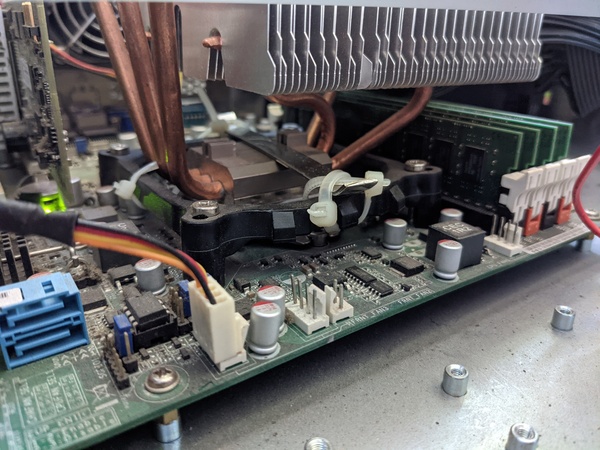 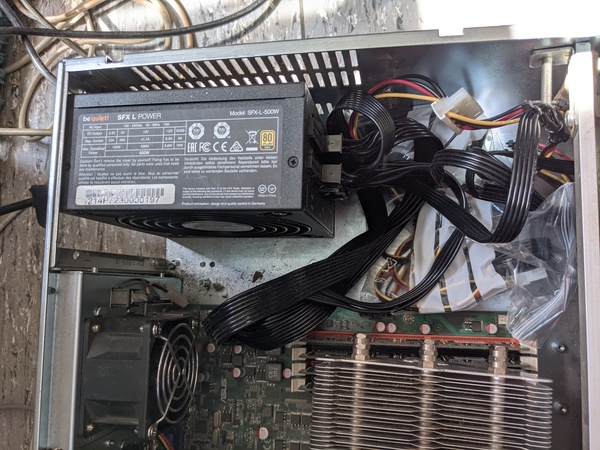 Here are some links to open directories I deem interesting or deemed interesting at some point for some reason or another. This list is not maintained; expect dead links.

Some Thoughts on Hoarding

Here are in short my tips to reduce hoarding of stuff you think you may need some day but almost certainly won't. If you're not really a hoarder - as in the worst examples that TV likes to portrait - but do have a problem throwing things away despite not having space to store all that clutter, this may help to clean out your storage. (I'm assuming it may because it does for me.)

If you have too much money you then buying storage or land to store things without having them clutter up your house is an alternative. But it's not really worth it. It's just paying money so you can keep that warmish feelng of still having access to everything but you'll also keep your problem. I mean unless you're really collecting something valuable or you become "that guy" for your town with large property where everybody goes before buying anything other than foot. Some towns have such a guy who stores avery piece of wood and metal they see so others can browse for their DIY projects. I like these guys. But you don't have the property for such a stock, do you? So don't try to be that guy for you town, for your friends or just for yourself. It takes the same amount of space in either case.

Being a digital hoarder myself, I'm hypocritical enough to have a different opiniont about data hoarding. But I'll write about that another time.